The secretary problem is the problem of finding the best candidate to hire out of $n$ rankable candidates from a sequence of 1-on-1 interviews, in random order. A hiring decision is made after each interview, with each decision being irreversible - any reject or hire decision is final. Wikipedia and Christian and Griffiths [1] introduce more useful details, and the key problem formulations are reproduced below for convenience:

The optimal algorithm at first appears useful for many common real-life scenarios that resemble the secretary problem, such as apartment search and hiring. However, a skeptical friend of mine rightfully pointed out that many real-life hiring scearios do not resemble the secretary problem exactly. For example, some hiring decisions are not made right after an interview. Following this line of thought, the assumptions that $n$ is known and that the ordering of candidate interviews is random may be too strong as well. Lastly, how practically-relevant is a success probability guarantee if the candidate search is performed once? This blog post attempts to address some of these limitations.

We start by deriving the optimal algorithm for the secretary problem. Under the premise to

we derive the probability of selecting the best candidate $P(r)$ that is dependent on $r$. This derivation is largely based on the one provided by wikipedia.

We next rewrite $P(r)$ using a series of mathematical manipulations to observe what happens when $n, r \rightarrow \infty$ (largely based on this math stackexchange post).

How does a success probability $P(r)$ translate in a real-life application? After all, after an interview loop ends, the only possible outcomes are failure or success in hiring the best candidate. First notice that $P(r) = \mathbb{E}[\mathbb{1}(\text{best candidate is hired})]$, which is an expectation. The weak law of large numbers states that as the number of trials $m$ approaches infinity, the average approaches the expected value. More technically, we have the following convergence in probability

where $\bar{X} = \frac{1}{n}\sum_{i = 1}^{n}x_{i}$ and $\mu = \mathbb{E}[X]$. Thus, what a success probability guarantee really tells us is that if the set of $n$ interviews is repeatedly multiple times according to the optimial stopping algorithm, the proportion of times the best candidate is selected is around 37.79%.

Let us study this via a simulation generating a random sequence of rankable candidates. We have control over two parameters:

Based on the derivation above, both $m$ and $n$ need to be large for the proportion of best candidate hires to be close to the 37.79%. We test values $n = 10$ and $n = 100$, which could correspond to apartment search and hiring in real-life scenarios. Then, we vary $m$ from 1 to 1,000, and observe how the running success proportion varies. 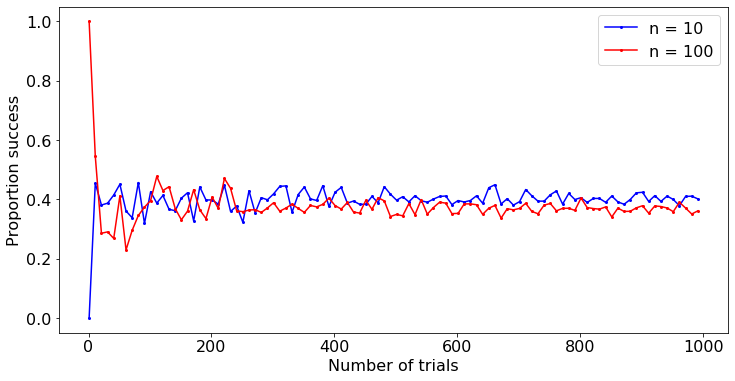 Imagine selling a house where

This variant was introduced by Christian and Griffiths [1]. In this scenario, the optimal policy is to not sell until an offer is made beyond a pre-determined minimum threshold $t \in [O_{\min}, O_{\max}]$. What threshold $t$ should we select? While you can wait until an offer close to the maximum possible is made, such offers also require longer wait times, which incur higher cost. The answer is to find $t$ such that the expected gain from taking an offer better than $t$ is at least the expected cost of waiting until an offer better than $t$ is made. Why does this make sense? Because this guarantee means that on average, the gain from waiting for a good offer outstrips the cost of waiting.

In other words, the objective is to maximize the minimum acceptance threshold $t$ while ensuring that the expected gain is at least the expected cost of waiting.

All the remains is to find $t$, and we start by examining the $\mathbb{E}[P_t]$ versus $t$ curve. The slope is given by

Finally, we can plot the offer threshold $t$ versus wait cost $r$ curve.

When the cost of waiting is big, you have less luxury of waiting for a good offer from the market.

Imagine a game where each round you stand to win reward $r$ with success probability $p$, but also stand to lose all of your cumulated rewards with probability $1 - p$. Given you have succeeded up to $n$ rounds, when should you stop? This game has often been introduced as the “burglar problem”, where each round is a robbery that can either end of success or with getting caught.

More formally, given $n$ successful robberies with cumulated reward $nr$, does robbing or quitting maximize the expected cumulative reward on the next round? It turns out we can solve for $n$ such that if the burglar succeeds for $n$ consecutive rounds, he or she should quit.

After $n$ successful rounds, the burglar decides to rob or quit based on maximizing the expected cumulative reward on the next round

For example, if you have a success rate of 90%, you should quit after successfully robbing 9 times.